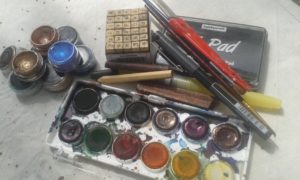 This is the shortest blog I’ve ever written and it’s because I’m about to begin work on my latest project which is called Digoll/The Unlost .

There’s a place in Wales called Cefn Digoll.  This translates as “The Ridge of the Unlost” and it’s what gave me the idea of making maps about what the voices of metaphysical features of landscape are trying to say.  I love the idea that being unlost comes from becoming aware of place rather than by finding a direction of travel. 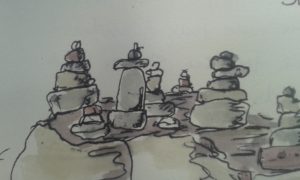 For the next few weeks I’ll be travelling up and down the country making small art maps of places that I visit.  Some of these I’ll be leaving in situ, others I’ll be bringing back to form part of my next exhibition.  If you want to keep up with what I’m doing and where I’ve been, you can follow me on twitter – @marialalic  or you can wait until next month’s blog (which will be longer than this one!) when I’ll post photographs of where I’ve been and what art I’ve made.  Until then, hwyl am y tro!