The historical kingdom of Dalriada was first settled by Irish raiders and eventually came to include much of what is now known as Argyll.  You can’t walk far in the area around Oban without coming across reminders of a past which sowed the seeds of Scotland and Scottish character.  This 11 mile walk from Oban to Sutherland’s Grove Forest (near Barcaldine) followed part of the Caledonian Way cycle route, most of which is traffic free or on quiet lanes.  If, like me, you start by going down the old carriage road towards Dunollie Castle, you’ll pass Fingal’s Stone.  Legend has it that that Bran used to tie his faithful hunting dog, Fingal, to this piece of volcanic rock.  It was just starting to rain when I got there so rather than get the paints out, I came up with a tercet. “From the west he will call through The weather was improving as I left Dunollie Castle and turned north.  By the time I reached Ganavan Sands with it’s wide sandy beach, the clouds were lifting with the sky promising a weak sunshine for the rest of the day .  I’d wanted to visit Ganavan Sands because it hosts a parkrun .  I wasn’t going to be in the area at 9.30am on a Saturday to do the whole 5K so I followed part of the route across the dunes and heath towards Dunbeg. I’ll confess that cycling doesn’t hold much in the way of attraction for me but if I’d had a bike on this stretch of the Caledonian Way, I’d probably have ended up walking anyway – there were some seriously steep slopes!  Having made the summit, the track wound downhill through a magical woodland.  The hillsides were covered in ancient oaks that clustered and curled together, gossiping secrets as the light breeze filtered through their drapes of lichen.  Occasionally a hidden crow splintered the silence with a loud C-a-a-a-r-k!  Field sketching and walking always combine to make wobbly paintings but I think it’s a great way to capture a mystical atmosphere of place. 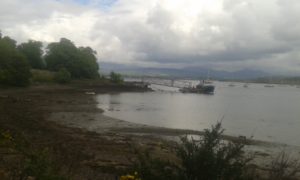 I diverted from the path at Dunstaffnage, home to many of the ancient kings of Scotland and where in the past the iconic Stone of Destiny was kept.  This was the place which was once the centre of Dalriada and for many people, it is where the ideal of a nation called Scotland was born.

Wandering through the bee-humming woods and past the ruins of a stone built chapel, was like walking through a lake of bluebells.

I came to a pebbly cove which is now home to a piece of Unlost Places art.  I drew the image with a waterproof feltpen so the sea shouldn’t damage it too much – for a while, at least.  I don’t suppose my pebble will ever be found on a beach where they are not only in infinite supply but constantly moving in and out with the tide but I like to think that it was my gift to Dalriada.

The Caledonian Way goes past some magnificent lochside scenery and walking is a wonderful way to appreciate the landscape.  I took this photograph when the Caledonian Way had curved behind some trees and away from the road.  I could hear cars hurtling along, their drivers having no idea of what they were missing.  From Benderloch I walked on quiet lanes towards Barcaldine where I encountered the first of the day’s midgies. Not even midgies could stop my heart from lifting when I realised that Sutherland’s Grove Forestry was home to an orienteering course.  My joy was complete when I found a map that someone had left on a bench rather than taking it home or putting it in a rubbish bin.  Following the orienteering course took me through some of the most picturesque parts of the woodland but even if it hadn’t, I loved chasing through the trees looking for controls and when I couldn’t find them, remembering that I’d always had a tendency to overshoot my intended location by misjudging my stride length.  Some habits die hard! In some of the glades, there were creatures sculpted in dead wood that could have inspired (or been inspired by) The Hobbit or The Lord of the Rings.  A  troll – presumably caught out by the May sunshine – was lurking close to a bridge over a narrow gorge. Higher up the slopes the scenery was even more dramatic.  It’s an area associated with the Celtic legend of Deirdre who escaped from Ulster to this part of Dalriada with her lover, Naoise of the Red Branch.  This photograph is looking towards Beinn Lora which translates to Deirdre’s Hill. In Wales, we call the gathering of wool tufts from hedges and fences gwlana.  I used gwlana and pickings of forest litter to create this piece of weaving which I left hanging from a tree in Sutherland’s Grove. 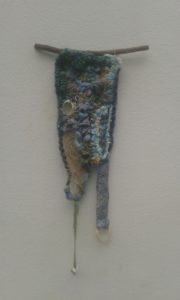 Unlost Places is a project about mapping the metaphysical features of landscape, using art to express what it feels like to be a certain place.  Just before I started this walk through Dalriada I’d stopped off in a shop in Oban and bought a pack of textured threads.  Since then, I’ve worked with my poetic tercets, field sketches and stitched samples to create this map of my walk using Free Form Knitting, Crochet and Weaving.

In the 19th Century, some doctors would prescribe knitting for the relief of high anxiety and hysteria and undoubtedly, knitting – like many craft skills which require concentration and dexterity – has a calming, almost meditative effect.  Can you sense a ‘but’ coming?  I won’t keep you waiting in case you are prone to high anxiety and hysteria – but, what happens if you can’t knit?  I don’t mean that you haven’t learnt; that is a situation that is easily remedied.  I’ve yet to meet a knitter who isn’t willing to share their skill and for most people, all that is needed to master knitting is 2 sticks (the technical term is needles but to all intents and purposes, they are sticks with bobbles on one end and a point of the other), yarn and some measure of manual dexterity.  Mind you, if you search the internet there are lots of people who manage to knit with their toes but as I don’t know what the foot equivalent term of manual dexterity is, I’ll carry on about the people who can’t knit. (Apologies to the toe knitters for any offence caused.)

My older sister, Nell, is a formidable knitter, socks and fingerless mittens being a speciality.  She designs her own patterns, does weird things called provisional cast ons, and waxes lyrical (and at great length) about the pros and cons of picot edging versus rib.  I’m not sure whether Nell’s spirit needs soothing but I am convinced that she views knitting as an intellectual adventure.  Without knitting, her hands would probably be picking away at the wallpaper in the pub where she and her compatriots currently meet for a ‘knit and natter’ session.  Social engagement is a wonderful by-product of most crafts, particularly the portable kind like knitting.

My younger sister, Annie, couldn’t knit.  Over the years many people (including me) of varying experience in knitting and/or teaching have tried to help her overcome this handicap.  All have failed.  Whereas once Annie took a kind of perverse pleasure in her ability to ‘break’ experts, just recently she has found herself in some situations where the calming effect of knitting  would have been welcome.  Now that I am doing some sessions as a mentor of creative practices (more on this next month), I decided to volunteer my services again.  Curiously enough, stepping away from my previous skills of teacher/tutor/educator and instead using those of a mentor/guide/companion was all it took for Annie to stop thinking in terms of success or failure.  Her woolly pumpkin is the end of her being willing – even happy – to say “I can’t knit”  and the beginning of a creative journey that is full of possibility.

Nestling between the two extremes of sisters and their knitting skills, my wool and needles have a more niche setting.  I use free form knitting (often called Scrumbling) to create deeply textured surfaces which act as a foundation for layered embroidery, embellishment with found objects and appliqué.  This allows me to forget figurative representation and instead make some deeply personal and subjective interpretations of cultural geography.

My current project is a continuation of my MA dissertation which involved mapping the metaphysical features of landscape through poetry and mixed media art.  A book, creative walked journeys and a linked exhibition loom in 2019 so work has started on a wall hanging called ‘Run!’.  Incidentally, the title has nothing to do with dropped stitches and everything to do with the ill-fated attempt of the Silurian tribe of Glamorgan to escape the advance of the Roman army in the 1st century AD.  In an effort to make the knitting belong to the landscape it is representing I have done some solar dyeing with plant material harvested from the area.

In addition I have been walking/running over the ancient paths of the the Glamorgan ridgeway with wool tied around my shoes.  It gets nicely stained with what you could call indigenous dyes if you were being academic, but sheep poo is just as accurate a term.

My doomed Silurians also had to climb a very steep ill in their efforts to get away.  One afternoon last month I repeated their journey, threw a ball of coarse Welsh wool down the slope and then wandered after it, knitting as I went.

Anything that got caught in the yarn – moss, fleece and, yes, sheep poo – got knitted in.  By the time this wall hanging is finished it will also have lines of poetry that will tell the story of a people who met their end within sight of their homes to the east and safe haven to the west.  There is no picture which can convey that reality but I’m willing to bet that knitting will do it justice.

So if you can’t knit yet – whether because you haven’t learnt or because you think you have some kind of congenital inability – maybe it’s time to have another go.  We knitters live in a world of excitement and joy, calm in the face of adversity and never looking for something to do.  Most wool shops offer lessons and workshops – sometimes with added cats like the wonderful Bramble Murgatroyd at Knit One in Dolgellau:

Lots of towns, villages and communities have groups which provide support and facilities for crafters of all sort.  My local area has established one to address everything from enabling artisan makers to counteracting social isolation by letting people learn skills from each other.  (www.craft.bridgendreach.org.uk).  There again, you could always join or start a yarnstorming brigade.  You need to have mischief making tendencies for this sort of thing and established groups are likely to be suspicious of anyone trying to push their way in.

If you’re still not convinced, maybe you should consider the words of Stephanie Pearl-McPhee:

“the number one reason knitters knit is because they are so smart that they need knitting to make boring things interesting.  Knitters are so compellingly clever that they simply can’t tolerate boredom.”