“Sing me a song of a lad that is gone,

Say, could that lad be I?

Merry of soul, he sailed on a day

Over the sea to Skye.”

For many people in the world the coast is a distant place to visit or to dream about visiting.  Those of us who count the sea as a neighbour, whether we are islanders or live along the edges of land, delight in its wide horizon, fickle mood swings and soul-lifting plays of light.

In Wales, 2018 has been dubbed “The Year of the Sea” and this title is also the theme of the poetry competition at this year’s Penfro Book Festival so if you fancy a bit of composing, you’ve got until the 15th August to get your entry in.

Back in June, when Cal and I crossed the Skye Bridge, we found a campsite right next to the sea and spent the evening walking with Mr MacGregor along the low paths of the Cuillins.

The variety of scenery in the British Isles never ceases to amaze me.  I am used to the battered and scarred cliffs of the Glamorgan Heritage Coast  that dance in and out of the sea mists of the Bristol Channel.  In Scotland there was something almost brooding and defiant about the way the blackened rocks of Skye leaned towards the shore, standing their ground against the pounding waves of the Atlantic.

As we sat outside a pub and I contemplated whether landscape features affect the character of indigenous peoples and vice versa, Cal slapped her neck and announced “Midge!”  We had until this point not seen a single one of the “Wee Highland Beasties” and hoped that our visit to Scotland was early enough in the summer to avoid them.  We were wrong.  Thanks to Cal deciding to leave Roxy’s back window open overnight we awoke at about 5am to find we were sharing the campervan with an advance party of midges scouting for breakfast.   Outside clouds of insects swooped and swarmed in a scene reminiscent of a 1950s doomsday film.   Ours was the fastest decampment ever seen and Roxy hurtled up the road, windows open wide in a desperate attempt to encourage the midges inside the van to leave.  Cal made an executive decision to aim across the island in the hope that this phenomenon was limited by location.  Eventually we swung into the car park at Dunvegan Castle – 2 hours before opening time – and assessed the state of play.

I had dead, dying and soon to be squashed midges in my hair, around my eyes and behind my ears; Cal had despatched any insect which had landed on her face with a self-administered open-handed smack which had left her cheeks red, shiny and covered with splatters of blood and bits of black carcasses.   I’m not sure if Dunvegan Castle Car Park had CCTV but if it did the sight of two women jumping about slapping themselves and each other as well as a Jack Russell joining in the jumping about and barking excitedly because he thought it was a new game, must have made for an interesting watch.

Eventually some semblance of calm was restored, breakfast was had and as soon as the gates opened we made our way into Dunvegan Castle grounds.  Cal and Mac toured the gardens whilst I went into the castle to fulfil two ambitions.  Firstly to see a Pictish stone close up

and secondly to stand in front of a fairy flag.

Both experiences were amazing and if you should ever find yourself on Skye, I highly recommend a visit to Dunvegan.  Perhaps not in June though because it became clear over lunch that the midges had followed us.  Cal decided that the best option was to make for the ferry port at Armadale and from there to Mallaig, Fort William and eventually the midge-less lands of England.

We travelled through some of the best scenery the world has got to offer.  Longtown sits at the western edge of Hadrian’s Wall.  Fallow deers roam the woodlands and time stands still to watch dappled sunlight.

Finally we got back to Wales; more specifically we reached the Welsh coast and the beautiful beaches around Harlech.  I’m going to leave it to Robert Louis Stevenson and Mr MacGregor to sum up this year’s tour because I think they both do it more eloquently and with more joi de vivre than me. 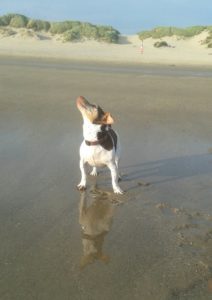 “Billow and breeze, islands and sea,

Mountains of rain and sun,

All that was me is gone.”