“Time is like a river made up of the events which happen, and its current is strong; no sooner does anything appear than it is swept away, and another comes in its place and will be swept away too.”

Thanks to Storm Ciara and Storm Dennis, rivers are attracting a lot of attention at the moment.  Here in Wales, being the first high ground that the Atlantic weather systems hit on their west to east trajectory, we get more than our fair share of rain which leads to a surfeit of rivers.  The Rev. Eli Jenkins’ list was by no means complete as it misses out, amongst others, the Severn, Usk and Wye:

Taff and Towy broad and free,

Small is our River Dewi, Lord, 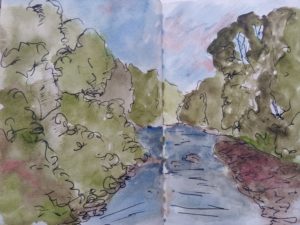 My childhood memories are scattered with river references:  in warm weather we’d paddle in the Afan where it flowed across Aberavon’s sandy beach or dare each other to crawl along the gas pipes that straddled the Ffrwdwyllt in the Goytre valley.  Occasionally, we’d be taken on a family outing to the Pontaber Inn on the Black Mountain, where a little bridge crossed a babbling stream that ran through the beer garden and, in Sunday best dresses, we’d lean over and play Pooh sticks.  Our local nant was dammed by work parties of children every June so that we’d have a makeshift lido right through the summer holidays.  Whilst none of us grew up to be civil engineers, we all knew that obstructing the flow of water downstream would create flooding upstream. 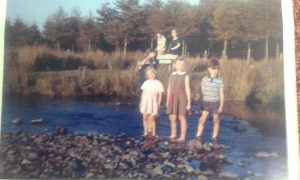 As a result, when I looked over the ancient stone walls of Crickhowell Bridge a few weeks ago and saw this, I felt qualified to get in touch with National Resources Wales and say that based on my experience, the tree in question was not going to dislodge itself and float away without help.  Now, not being local to Crickhowell, once I got a nice message back from National Resources Wales saying the matter was being referred to their Incident team, I stopped thinking about the tree but not about rivers, and not about the things that get swept away by them.

The path to Llangattock runs close to a little brook and as I stopped to take this photograph of snowdrops, a dead duck floated past on the fast flowing water.  For some reason – I think it’s to do with the fact that the duck was stretched out, lying on its back with wings at its side and I’ve been reading too many books about Viking boat burials recently – I have been unable to erase the image from my mind.  I suppose we should all be glad that my camera was pointing at the snowdrops or you might now be having the same problem. 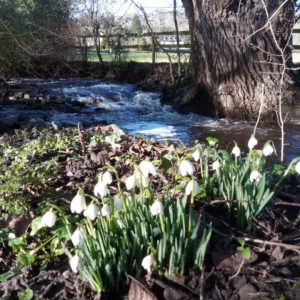 Returning home the following week I got an email asking me if I wanted to submit a piece of work – art or poetry – to an exhibition.  It was to be on the theme of ‘Rivers’ and as I live close to the river Ogmore which starts with a mountain spring before plunging over a bare rock cliff as a tumultuous waterfall, I thought, yes, I can do that.  I did a field sketch then composed a poem called ‘Leap’ in my usual 7 syllables a line, 3 lines a verse format and sent it off.  When it came to the stitchery however, all I could see was the dead duck and as I was pretty convinced that the exhibition organisers didn’t have a drowned bird in mind when they decided the title, I thought I had better go and find some different inspiration.

You may recall that last month’s blog ended near the Mynydd Portref wind farm.  It’s a short distance from there along an old pilgrim path to the small village of Glynogwr where a lane opposite Llandyfodwg Church leads to a winding brook called Nant Iechyd.  There are two ways to cross the water – a small footbridge over it or the Dimbath Ford straight through it.  It’s a route which I run regularly and is home to one of my pieces of transient land art.  A small detour into a wood on the west of the lane leads into a hollow way and just before the trail putters out into wide green meadows, I built this piece of sculpture and decorated it with one of the many crab apples that litter the ground.  It was at grid reference 942888 but Storms Ciara and Dennis may have altered that. 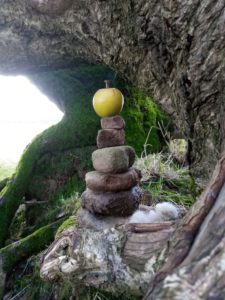 It’s always tempting – but rarely right – to use blue to give the impression of water, especially if you’re not working figuratively.  With the drowned duck still at the forefront of my imagination, I went for a less romantic, maudlin palette.  Also I didn’t have much blue wool in my stash whereas there seemed to be a lot of muddy browns and greys.  As usual, my free form knitting began with a ribbed edge and drifted off into long straggly bits which gradually got infilled and joined up until they formed a single piece. 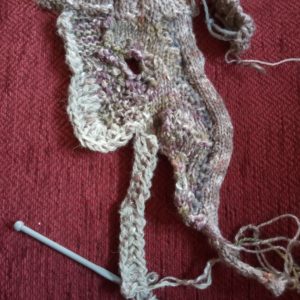 I had picked, sliced and dried some of the Dimbath Ford crab apples to use as beads and set them to dangle on invisible thread down one side of the hanging.

I’m quite pleased with the result;  the colours are very evocative of a floody river, the textures are great and best of all, I have nearly (but only nearly) erased the image of the sodden bird as the river swept him away to his final destination.  Now all I have to do is decide on a title for the artwork so it can be submitted for the exhibition.  Do I go with Time like a river?  Dimbath Ford?  Or Epitaph for a Drowned Duck? 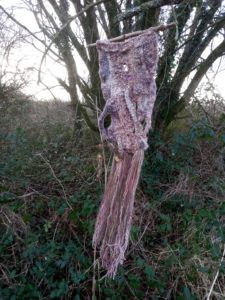 “Learn from a river; obstacles may force it to change its course, but never its destination.”     Matshona Dhliwayo