“In a world gone bad, a bear … is a comforting, uncomplicated, dependable hunk of sanity.”      Pam Brown

It’s the 1st of December, the start of Advent, and I am at a Christmas Fayre which is being held to raise money for a charity.  Towards the end of the afternoon I notice an elderly lady, who has been helping out on the bric-a-brac table, wandering about the room as if she is looking for someone particular.  She is holding a small teddy bear close to her chest.  I watch her with the experience of a person who has spent their working life in the NHS and I get ready to spring into action if she starts to look distressed or disorientated.  Almost as if she hears my thoughts, she stops walking towards the door, turns and her eyes meet mine.  I smile and she starts moving in my direction.  “Hello,” I say. “Are you having a nice afternoon?”

“50p or he goes to landfill,” she answers.  She holds her hand open, waiting for the ransom to be paid.

The bear stares forlornly at me.  What choice have I got?  I open my purse and get out a coin.

“That will do.” She takes the money and thrusts the bear at me.  “Be happy,” she says as she heads back to the bric-a-brac table, sweeps up a rag doll and heads off towards to a smartly dressed man having a cup of tea in the corner of the room.

Which is how and why, this year, Aneirin the Teddy Bear, has come to be the star of my Advent Calendar on Twitter (@marialalic).  Two days after his (its?) arrival, we headed onto the Glamorgan Ridgeway for an Unlost Places expedition, about which I will write more in January when sanity has returned.  Unused to having company on my walks, I started off by introducing him to trig spotting 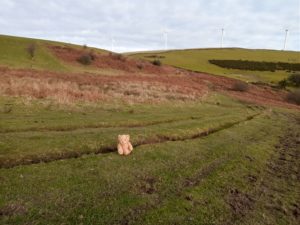 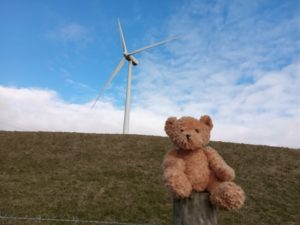 We ended our trek with Cranberry & Orange Scones at the lovely Black Mill Cafe in (not surprisingly) Blackmill Village.  Cranberry and Orange is is not a flavour combination that would have occurred to me but it was very successful, particularly coming with a choice of either Cinnamon Butter (very nice) or Orange Curd & Clotted Cream (sublime).  If ever there was a reason to support #indie cafes and coffee shops, then being able to sit opposite a small teddy bear  and share your afternoon tea without anyone looking askance at you, is it. 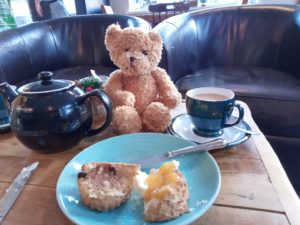 I had to be in Powys on the 5th December so there was a good opportunity to get at least three photographs of Aneirin done for the Advent Calendar.  One of my favourite places in the world is the lovely Tretower Court and Castle.  The man on reception didn’t find it at all remarkable that a small bear would be touring the premises.  Put him, he said, on the throne in the Banqueting Hall.  I did but Aneirin – being little – was overwhelmed by the immense table and the majestic wall tapestry.  My advisor was undeterred.  Try, he suggested, getting the castle in the background.  This proved to be much more in Aneirin’s style. 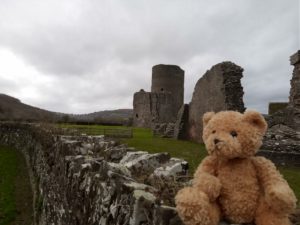 The problem was that although I like the castle ruins, it’s the atmospheric Tretower Court that I love.  I wandered in and out of the rooms and galleries before finally finding a place where Aneirin could channel his inner Errol Flynn. 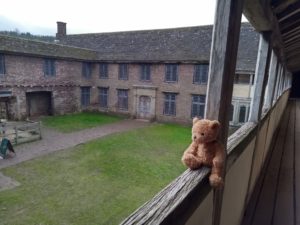 Sunday, 8th December was the day that Storm Atiyah made landfall and the day that I was stuck on Newton Beach for more than two hours, marshalling The Christmas Pudding Race that is organised by a local running club.  70mph gusts of wind sandblasted everything, everyone and every teddy in their way.

With Aneirin safely anchored to a piece of driftwood, I made a piece of Unlost Places art using found objects from the strand line.  It started off as a sort of windchime but soon ended up wrapping itself around the supporting piece of wood.

With the last runners safely off the beach, we (I mean all the volunteers and not just me and Aneirin – I have not slipped that far off the plane of reality) made our way back to the finishing area.  I know that virtue is its own reward but marshalling brings lots of practical benefits too.  Banana themed meals for the next week, for example. 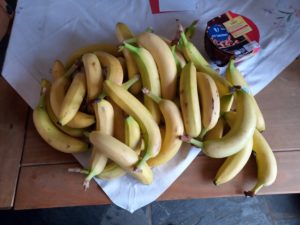 I’ve decided that having a teddy bear companion has been quite a pleasant diversion to the awfulness which saturates the News these days.  And not just for me, either.  One of the sanest people I know is going to knit Aneirin a jumper and she didn’t even take a lot of persuading! 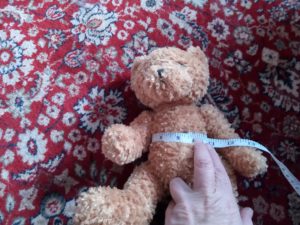 Aneirin’s Twitter activities are unlikely to last into next year unless I decide the world (or me) is in need of a bit less sanity and a bit more distraction.  As a thought provoking Christmas present to you as you’re still reading, I’ll leave you with this quotation from Douglas Adams:

“If life is going to exist in a Universe of this size, then the one thing it cannot afford to have is a sense of proportion.”