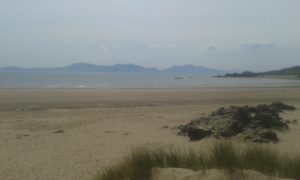 The idea behind Prosiect Digoll/Unlost Places has been milling around in my head since I first realised that I could combine poetic tercets with creative stitchery to map metaphysical features of landscape.   I’ve noticed that when I say this sort of thing to people (family, friends, complete strangers – I’m not fussy), their faces go blank, their eyes glaze over and they wander away, making lame excuses about having something else to do.  If you’re still reading at this point, I assume you are mildly interested in Prosiect Digoll/Unlost Places or some aspect of creativity so I’ll start by explaining some of the terms I’ve used in the first sentence. 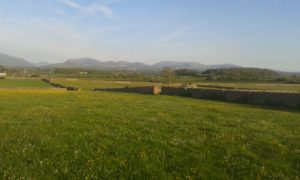 The photographs/video I’ve used up until this point have been of Anglesey (Ynys Môn) which will give a sense of what it looked like.  What it was like to be there needed a more creative response.  On Llanddwyn Beach the sands yielded plenty of raw material to make some beach art which could be left in the place which inspired its making.

Listening to waves rattling over pebbles and rustling seaweed on the strand line made a phrase pop into my head:

“she was prey to restless waves”

and bearing in mind that I was in the homeland of Branwen, there was an inevitable effect on the tercet:

she was prey to restless waves;

Hope was borne on slender wings.

I collected pebbles which formed the basis of this piece of creative stitchery. 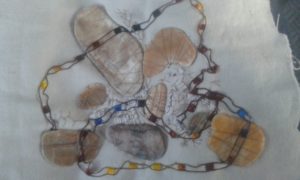 Finally came the mapping of metaphysical features of landscape.  If you ever visit Llanddwyn Bay on Anglesey (and if you get the chance, you should), this may not help you get from A to B but it’s what the place did to my stitching fingers. 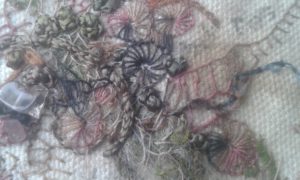 I’ll leave the last words to someone who  spent his childhood on Anglesey and may have walked on the same beach.  I think he’d probably understand what I hope to achieve through Prosiect Digoll/Unlost Places.