“Sometimes it falls on a generation to be great.  You can be that generation.  Let greatness blossom.” 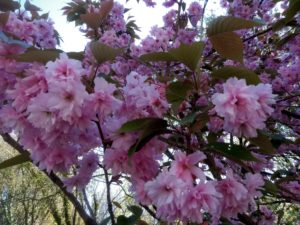 It would be very easy to write this month’s blog about something deep and meaningful but two things spring to mind – firstly, I’m not very good at deep, meaningful writing and secondly, I want to introduce my scarecrows to a world which has a surfeit of deep and meaningful things to think about at the moment.

Trevor, my first scarecrow, appeared in the garden in April 2008 just as the fruit trees were blossoming.  He’d arrived thanks to a book called Creative Scarecrows written by Marcianne Miller.  Based on the pattern for Uncle Billy (page 27), I positioned him in the vegetable patch so he could aim a cheery wave down the busy main road that runs alongside my garden.  It wasn’t long before I decided that Trevor was lonely and that if he had a girlfriend, she could also aim cheery waves to passing motorists.  Page 15 of Marcianne’s book showed a graceful Tea Party Lady but when Lucille arrived, thanks to someone giving me a bag of clothes that consisted of lycra leggings and oversized shirts rather than pretty floral dresses, she turned out to be not at all graceful and not that much of a lady either, but she did look as if she was up for a party. 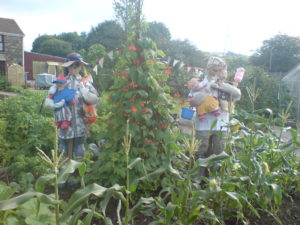 Anyway life with two scarecrows was reasonably normal until one day Trevor and Lucille got a postcard from someone who was holidaying in Spain.  Then came letters from lots of different people, greetings cards and the occasional gift – two umbrellas were left for them after a rainy spell and Christmas brought brightly wrapped parcels of chocolate and wine.  Lucille was particularly popular with male drivers who beeped and wolf whistled at her as they swept down the road.  In the end the inevitable happened and Trevor and Lucille had offspring, one girl and two boys.  Is anyone else starting to wonder how I managed to use the word ‘normal’ earlier in this paragraph?  By 2010 Trevor and Lucille had been in the local papers, on television and were even interviewed on radio.  I’m guessing it was a broadcast that required a bit of imagination on the part of listeners.

That year Trevor and Lucille’s home – yes, by this time they had a little shed of their own at the bottom of garden – was decorated for Christmas by lots of glitzy garlands and silver stars declared surplus by an M&S window dresser.  And then, quite suddenly – but as is the wont of scarecrows – Trevor, Lucille and the children disappeared.

Actually when I say disappeared what I mean is that Trevor fell apart and Lucille’s lycra leggings disintegrated at the same time.  I’ve never been sure if these two events were connected and it’s probably better not to think about it too much.  According to country lore April is when new scarecrows appear so it seemed like a good time to re-open the pages of Creative Scarecrows and start again.  Page 20 had a photograph by Kathy Smith of an Illinois based scarecrow whose face had been sculpted out a nylon stocking.  Always ready for a stitching challenge I produced another two scarecrows that I christened Rowli and Cati Puw, after characters in a Glamorgan fairy tale.  Now whereas Lucille had been a bit of a slapper, Cati was much more refined and she sat demurely on a bench in the shed.  Rowli was tall, rugged and had a weirdly realistic face thanks to the needle-sculpture.  In fact some folk commented that he was a handsome devil and if Lucille had met him first she wouldn’t have given Trevor a second glance.

One Thursday at about 7 o’clock I shouted “Morning!” to the scarecrows as I jogged past to go for a run around the village.  I came back up the hill after half an hour and from the bottom of the road I could see that there was something amiss.  Rowli was no longer standing next to the shed.  In fact, Rowli was nowhere to be seen.  I got back to the garden and said “Where’s he gone?” to Cati.  She ignored my question and stared silently into space.  Rowli’s empty wellies were the only things left to show where he had once stood.  This being a small village, news of Rowli’s abduction spread fast and later that morning as I was weeding the vegetables, a police patrol car swerved across the road and a voice shouted,

“Any thoughts on who could have taken him, love?  We’ve got everyone out looking.”

“Thing is,” said the policeman, “We’ve had a formal report of him being missing now so we’ve got to act on it.  Anything you can tell us might help.”

“Some big cheese in the council.  There was a committee meeting going on when one of the councillors got a phone call telling him the news.  Uproar, there was.  Reflects very badly on the area to have crimes like this taking place says the big cheese.  We’ve been told to pull out all the stops and – hang on.”

There was a crackle on the radio and a static encrusted voice could be heard shouting,

“I’ll be back,” yelled the policeman and the car shot up the road, siren blaring.

Not long after the patrol car returned with Rowli sitting in the back seat.  He was a bit dishevelled, his shirt was ripped and he generally looked the worse for wear.

“Where did you find him?” I asked as the scarecrow was lifted gently out of the car and set down on the bench next to a still staring Cati.

“In the next village.  Turns out he was the third party in a domestic.  Some woman told her boyfriend she thought the scarecrow was more of a man than he was.  So the bloke dumped Rowli on her doorstep and left a note saying go on then, see how often he takes you out and spends money on you.  We’ve had words with all concerned.  No harm done, I hope.”

Sadly for Rowli, there was harm done.  Mostly to his face.  I spent the afternoon doing reconstructive surgery but he never looked quite so ruggedly handsome again. 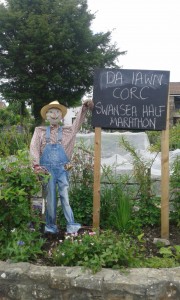 Dad died in 2012 so for a few years I took a scarecrow break.  Indeed, in the inevitable post mortem declutter I even gave the Creative Scarecrows book to a charity shop.  Life was fairly routine until in Spring 2016 I decided to buy a new freezer.  The man who delivered it was pleasant and efficient.  Just as he was about to leave, he paused and said

“Do you mind if I say something?  A few years back my life was awful.  There were days when I couldn’t face going out to work and when I was at work I couldn’t face going back home.  It was an awful time.  Terrible.  But every time I drove past here and saw your scarecrows, something inside me smiled.  They were great.  I miss them.  One day I hope you’ll put them back because while I’m OK now, there are other people out there who aren’t.  Sorry.  I hope you didn’t mind me saying.”

I don’t have a local bookshop so the only alternative was to type Creative Scarecrows by Marcianne Miller into the computer.  There was a copy available at a second hand book company based in Carmarthen not that far from where I live.  It arrived within the week and on the first page in pencil was the same message that I write in all of my books, namely “Please return this book to Maria.”  Thus directed by fate (and a photograph on page 49)  two new scarecrows were made and took up residence just as the fruit trees came into blossom.  Soon the shed was repaired and a blackboard (for messages to the passing motorists) put up but I have to say that I never really engaged with Peri and Winkle.  They didn’t have the innocence of Trevor, the femme fatale charisma of Lucille or the lothario-like character of Rowli Puw.  When this April came and brought with it uncertainty and sadness but also unselfishness and heroism, I thought the time was right to find a pair of scarecrows who will embrace the future with a bit of what we in Wales call Hwyl. 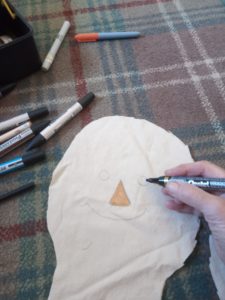 Clovis and Tilly have no idea what lies ahead of them but looking at the experience of previous generations of scarecrows, they are unlikely to falter.  With good humour and generosity, they’ll find friends in unexpected places and bring smiles to unseen faces.  They’ll be great ambassadors for scarecrows the world over, living a simple, kindly life and waving to strangers just to cheer them up.  And their greatness will blossom throughout April and into the years ahead.

Just as yours will. 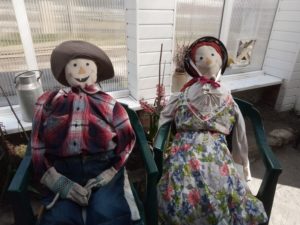