Fed up of this rainy autumn?  Then let me take you back to a hot summer day instead,.  It’s Friday the 28th of June.  Even the usually muddy waters of the Towy estuary are glistening under a  blue sky; no whisper of breeze disturbs the green-leafed trees that edge the railway track between Kidwelly and Carmarthen.  As the train passes through Ferryside (Glan-y-fferi) station I glance out of the dust smudged window at the silhouette of Llansteffan Castle, perched on a hill above the opposite shore.  I make this journey quite often and that glance towards Llansteffan Castle means it’s time to stop working, put my books in my bag, collect my belongings and get ready to leave the train. 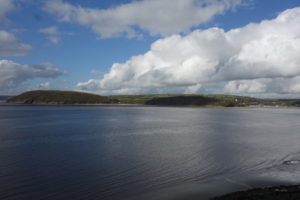 I stand up, hear my phone hit the floor (because it was on my lap not in my pocket) and spend valuable moments in an undignified scramble between my seat and the one in front.  By the time I retrieve my phone, Carmarthen station – which was ten minutes away – is now much closer and I have a flurry of anxiety at the possibility of missing the opportunity to get off the train, instead being swept towards Milford Haven, Pembroke Dock or Fishguard.  (I should say that I have visited – intentionally – all of these towns and would be happy to do so again.  It’s just that if I’m aiming for Carmarthen, that’s where I want to go.)  Today I am taking advantage of the town’s integrated transport hub to get me to my destination.  Or I would if I could be bothered to wait for the bus at the railway station.  I can’t, so walk across the wonderful Pont King Morgan Footbridge to catch the 227 bus to Llansteffan village.

As well as its castle and the titular church, this place was home to the late artist Osi Rhys Osmond and it’s where Dylan Thomas spent much of his childhood, later inviting the world to share its magical innocence through his poem ‘Fern Hill’.  These are the sort of things I should know about before travelling somewhere to make an art map but one of the flaws in my exploration technique is that I tend to visit a place first and do the research afterwards.  Then, of course, I need to go back so that not only do I have context for my wanderings but I will have also worked out where the best coffee and cake is to be had en route. 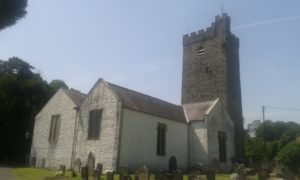 Anyway, back to the plot.  The number 227 bus takes about 20 minutes to reach  Llansteffan and then carries on to Llanybri.  When you’ve never been to a place before, the best plan for choosing where to get off a bus is to wait for some local to ding the bell and shuffle to their feet.  This tried and test method means that I soon find myself at the corner of Water Lane.  The bus trundles off uphill and out of sight.  Not surprisingly Water Lane leads down to the the river but before you get to the Towy itself, some town planner has thoughtfully arranged a surfeit of car parking places as well as neatly cut verges and picnic benches.  I walk down the road, nosing over low walls into people’s gardens, looking for ideas and comparing the growth of their roses to mine.  (Mine are better.) 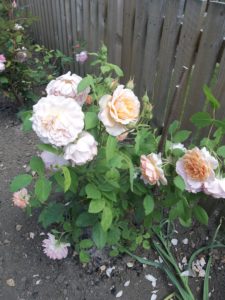 The river has disappeared behind a nature reserve of marram-grassed sand dunes.  Maps giving instructions about where, when and how dogs are allowed to be walked, to defecate or merely to exist confuse me because they (the maps) have been orientated through 270 degrees so you have to lean at an extreme angle to make sense of them.  Not having a dog with me, I don’t bother.  After a bit there are more car parking spaces;  benches alongside the pavement give a view across the estuary expanse that is as impressive as it is unexpected.  Who’d have thought there would be an immense, golden and tropical looking beach?  Hardly anybody by the look of it. 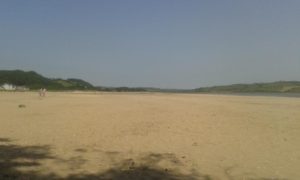 There’s a footpath to the castle signposted from the corner of the car park.  After a few hundred metres it forks: right is The Old Road (sic) which leads into the village with its artisan bakery, pubs and church; left the path goes steeply uphill to the castle.  When you climb to the top and survey, breathless, the panorama across the bay, it’s easy to understand why – before the Normans got here – there had been an Iron Age Hill Fort and a 6th Century Promontory Fort.  Right up until it ended up in the hands of the Tudor dynasty, Llansteffan Castle was a target for and site of conflict between the English and the Welsh princes. 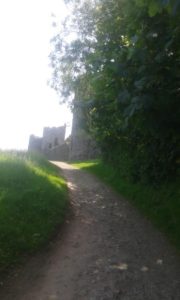 I don’t stay at the castle long because there’s no shade inside the walls from the sun which now high in the sky.  I go back down the path and follow The Old Road to the village.  An elderly man is strimming undergrowth in the walled graveyard – the Llan – that surrounds the church of St Ystyffan.  It’s a grade II listed building of white washed rubble stone, the oldest parts of which are dated to 13th Century although it’s likely that it was a site of Christian worship from the 6th.  St Ystyffan was a contemporary of St Teilo and there are other churches in Wales dedicated to him, particularly in Powys.  It’s lovely and cool inside the church so I take my time admiring the medieval stonework and the beautiful stained glass windows.  Outside the strimmer putters to a halt and doesn’t restart.  Either man or machine thinks hard work and the midday day sun don’t go together.  From the church I walk back up The Old Road, this time veering off before the castle slope and going through an iron gate. 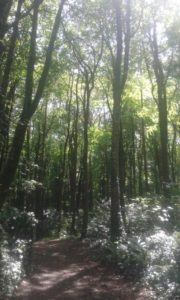 A woodland path leads to St Anthony’s Well, now little more than an arched hollow with an empty niche but once known as a healing well with pins and pennies left as offerings.  A series of stone steps takes me onto the scorching sands of the beach.  The cool, shimmering waters beckon me and I can think of nothing better at this moment than a paddle in the shallows.  Until, that is, I find that between me and the Towy are the remains of many, many dead jellyfish. 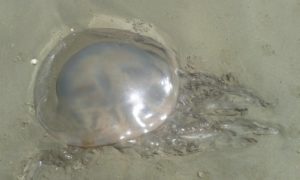 I retreat to the beach cafe for an ice cream and wait on a bench for the arrival of the boat which will take me back to Ferryside.  When I make maps, I spend a lot of time thinking about how to convey the poetic and metaphysical features of landscape through stitch.  Now I’m going to have to find a way to express jellyfish mortality too.   In the meantime though, this is the stitched sketch I made of the walk in the countryside around Llansteffan: 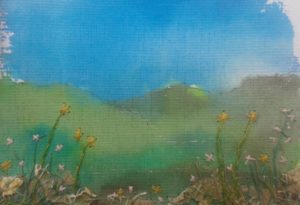 The best bit of the whole day, however, was the view of Llansteffan from the Carmarthen Bay Ferry. 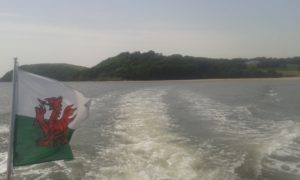