“We should show life neither as it is nor as it ought to be, but as we see it in our dreams.” 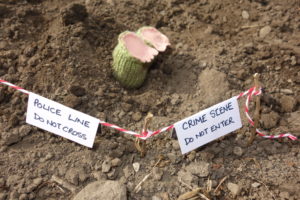 I’m going to write a whodunit.  Not a gritty, gory crime novel – they’re too much like real life and for the moment, I’ve had enough of reality.  And not one of those brooding melodramas set in a beautiful landscape where everyone is gorgeous looking, under 40 and affluent but with no obvious source of income.  No, I’m going to write an old-fashioned mystery with a collection of eccentric characters – all with dodgy alibis and skeletons in the cupboard – who lurk about suspiciously and generally undermine the efforts of the police to bring the guilty party to book.   Back in 2007 when I was concocting a detective story for my Creative Writing degree, Rob Middlehurst (my tutor at the University of Glamorgan) advised me to sketch little life stories for my protagonists to make their part in the plot believable.  If he’s reading this, he’ll be pleased I sort of paid attention.  Even though I am still without a detailed plan of how the tale will unfold – it involves blackmail, jealousy and a compost heap on the village allotments – I think my characters’ backgrounds are very realistic.  It’s just that there was no sketching involved – only some scraps of wool and too much time on my hands.

Every village needs a Vince.  In Woollyton, Vince organises the parkrun that starts off with two laps of the playing field before following a footpath into a glade of trees.  Local legend tells of lost treasure buried in a cave somewhere in the Woollyton Woods and says that those who stumble upon it either go completely mad or are never seen again.  Vince seems as sane as any other Run Director, muttering to himself about things he’s forgotten to do as he pegs out the course at the crack of dawn each Saturday.  He never goes into the woods though, preferring to send a marshal who will stand alone beneath creaking branches until the last runner passes and then collect the tape which marks the route before heading back to the playing field.  Last month Mike the Marshal didn’t return at the end of the run.  Not to the finish line, not to his house where Mrs Mike had lunch on the table and not to his job the following week.  “Just as well,” said Vince to the policeman who came enquiring for information, “I’ve got a spare hi-viz jacket and plenty of tape so I can send someone else into the woods next week.” 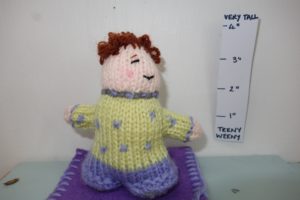 What Sue really wants is for everyone in Woollyton to take up Yoga, thus making her business plan for a naturist retreat called Yogi Bare irresistible to the bank manager who needs to agree her loan application.  In the meantime, she has to be content with daily classes for the clothed and faithful few at the Community Centre.  Except, of course, on a Saturday morning when the parkrun takes place and Sue has to yield all of the car parking spaces, the changing rooms and the little cafeteria (The Sticky Bun – tea/coffee and, you’ve guessed it, a sticky bun  for £2.50) to Vince and the runners.  This she does with all the magnanimity of someone who can adopt the position of Downward Dog and stay in it for 47 minutes without her digestive system announcing its existence to the world. 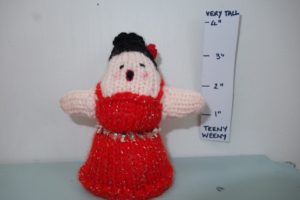 Half of the residents of Woollyton are sceptical of Olga’s claim that she once sang in Milan and the other half say that anyone who hangs around the bars in Milan on a Saturday night will end up singing so her lack of modesty doesn’t necessarily imply talent.  Olga proves her case (one way or the other) by taking up position at her bedroom window each evening  after the Channel 4 news bulletin and letting rip with an aria.  This cultural largess has been raised at council meetings in the Community Centre where compensation for broken glass in the cold frames and greenhouses on the allotments nearest her house is consistently refused. 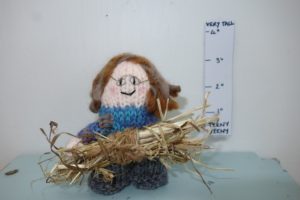 Annie is one of those people who is rarely seen without a bale of hay in her arms.  Quite why this is has never been established as she doesn’t keep animals and lives in a tiny flat above Woollyton’s only shop, with not even a flower box to call outside space.  Those who have taken up Annie’s invitation to drop by for a nice hot cup of tea (that is, virtually everyone Annie meets on her hourly quad bike rounds of the village) are quick to say that Annie isn’t a gossip but she does know about most things that go on in Woollyton.  And when they’ve said that, they wonder where she gets the money to pay for the hay, the quad bike and the petrol she has to buy to make hourly rounds of the village. 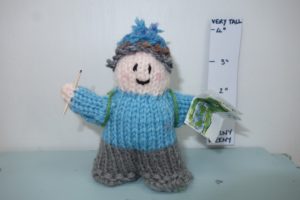 Until the parkrun was launched, Rosie was the only person who wandered the paths through Woollyton Woods.  Now each Saturday people come from miles around, double parking their cars on verges and blocking driveways.  For a while Rosie tried to rally opposition to Vince and his marshals but to no avail.  Then she signed up on the parkrun website, got a barcode of her own and began joining in every week.  She is very fond of rambling in the rain and on days when the weather is particularly inclement, Rosie enjoys walking the route – very slowly – and waving to the cold, sodden hi-viz heroes who grin back at her through gritted teeth and send silent messages of a speedy finish followed by  cramp in both calves. 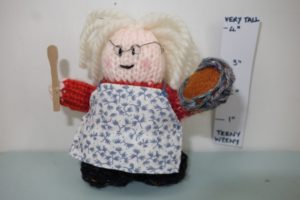 When Betty took over the Community Centre café, it was on the understanding it would be developed into a healthy eating outlet, a hub for home cooked meat free, gluten free, dairy free but money expensive meals.  However in response to public opinion, Betty reneged on the terms of this unwritten agreement and announced that the entire menu would consist of sticky buns but with some exceptions.  Thus, on Bank Holidays and other auspicious occasions (many of which occur on Saturdays), Betty expands her repertoire – and the waistlines of her customers – by offering fried bacon and sausages layered in doorstep thick slabs of squidgy white bread served with great steaming mugs of hot milky chocolate at a cost all of her customers are more than happy to pay.

Nellie the Knitter and Brian Behind the Paper 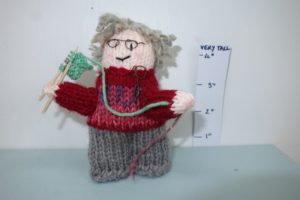 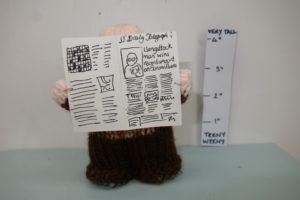 Nellie and Brian celebrated their retirement by building a little bungalow in a peaceful spot near a grassy meadow and calling it “Paradise”.  Then the owner of the grassy meadow had the nerve to die and leave it to the residents of Woollyton as a playing field.  To add insult to injury he also left a strip of land to become allotments for the villagers and enough money for them to build a community centre.  Soon “Paradise” was anything but peaceful and one Saturday Brian took a felt pen and scrawled the word “Lost” on the house plaque.  That was the day Nellie abandoned crocheting granny squares and began knitting fair isle socks on 5 needles with a provisional cast on to the double rib cuff and Kitchener cast off at the arrow point toe line.  It was also the last day that Brian was seen as he’s been behind a paper ever since. 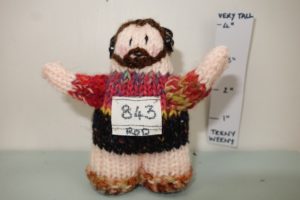 Every morning Rod squeezes himself into a pair of lycra shorts that were tight fitting when he bought them 3 years and 4 kilos ago.  He’s convinced that those 4 kilos are upper body muscles but many people who view his jogging form from behind would disagree.  Rod, being the Chairman of the Community Centre Committee, had to pretend to welcome the arrival of Woollyton’s parkrun but in truth, he always felt that running was too serious a business to share with the general public.  He even had to give up on his ambition to develop a wholefood restaurant at the Community Centre when one by one the rest of the committee, thanks to Betty’s persuasive skills, voted for the Sticky Bun alternative.  All of these things he writes about over and over again, in long, poetic letters to the only person in the village he had ever loved.  Letters which he seals with a smudgy kiss and never intends to post. Although once, a carelessly left open window and an afternoon breeze saw one of them waft from Rod’s desk and land, like litter, on Woollyton’s playing field.

I started knitting the little people just for a bit of fun but as so often happens, one thing has led to another.  Let me assure you – and particularly the people who I know personally – that whilst there may be a knitted resemblance to some of my friends and family, any links to dodgy alibis and skeletons in the cupboard exist only in my imagination.  Admittedly I haven’t worked out who among them is going to be the amateur detective, the culprit or the unreliable witnesses but I think I have populated Woollyton with more than enough eccentricity.  I wouldn’t be surprised to start getting messages from those within my social circle fairly soon suggesting the roles their character could play and which Hollywood star should take their part when the film rights of my whodunit are sold.   To them I would say –

“In all our dreams!”

Now, are there any publishers out there reading this?