I’ve been fascinated by walking ancient tracks ever since childhood when in long summer holidays, my mum would shepherd me and my sisters along the sheep trails that led from sandy dunes near Aberavon up onto the moorland slopes of Baglan mountain.  At the time I didn’t know anything about the tracks being ancient and admittedly, much of the fascination came from seeing how long any of us children could hold onto the low voltage electric fence wires that were used to keep the sheep on the mountain and not wandering through the town of Port Talbot below.  Let me make two clarifications relating to the electric fence wire:  firstly, we didn’t have Health and Safety back in the 1960s; we had health, we had safety and for the most part, we had a lot of good luck and secondly, it was my younger sister Annie, who proudly claimed the record of being able to hold on to the wire – and its associated voltage – for about 10 seconds which was some 4 seconds more than Nell and 9 seconds longer than me.

Anyway, let’s get back to the point about the ancient tracks and specifically, the ancient tracks which crisscross the bracken covered slopes that look across the Bristol Channel towards Somerset.  2000 years back this area was inhabited by the Silures tribe who held sway over most of south east Wales from the River Severn to the River Lougher.  The name Silures came from the Latin meaning “the people of the rocks” and according to Tacitus, they were swarthy with black, curly hair and a predilection for war.  It took the invading Romans of the 1st Century AD about 30 years to finally subdue them.    More recent than Tacitus, Niel Faulkner said “Ancient Siluria was a land of boggy uplands, wooded slopes and narrow valleys and plains… it was a rougher, harder and more impoverished land and its people skilled in war…” 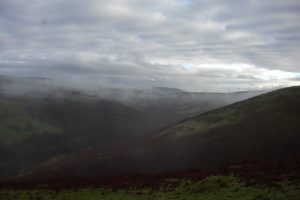 Now this is about as much as I know about the Silures and as I am not a historian but an artist, I think it’s about as much as I need to know.  I’ve never been one to let fact get in the way of creativity so you should understand that much that comes after this point is the product of my imaginative wanderings.  Maps show that the Glamorgan ridge is about 20 miles west of Baglan mountain and it is covered with place names which hint at a violent past: Mynydd y Gaer (the Mountain Fortress), Mynwent y Milwyr (the graveyard of the soldiers) and Gadlys (Battle Court) to name but a few. 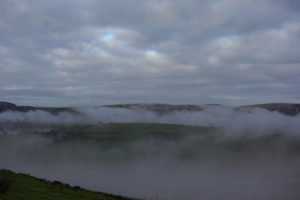 I’ve spent the last couple of years mapping the area but it was only at the end of 2018 that I climbed onto the ridge from the south (I usually go up from the west or the north).  Suddenly I realised that all of my previous conclusions about the area being the site of an attack by the Romans on the Silurians could be wrong.  Ascending from the South would have been almost impossible for the invaders and if they did make it to the top, then it was probably because they were being lured into an ambush.  Whether hunted or hunters, I’m of the opinion that the Silurians and Romans would have fought a running battle heading towards Baglan mountain, not because they had a burning desire to see the spot where – 2000 years later – a street artist called Banksy would make Port Talbot famous (again) – but because it was a defensible stopping off point en route to the safety of the River Lougher.  Who won and who lost is buried in the mists of time but there’s a small valley north of Port Talbot known to locals as Cwm Lladdfa (the Vale of Slaughter) so clearly it didn’t end well for one side or the other.  Incidentally this is a place name which doesn’t show up on modern maps which are digital representations of topography rather that visual interpretations of place and time.  As the Ordnance Survey do what the do so well, I’ll leave the technical stuff to them and stick to my wild imaginings. 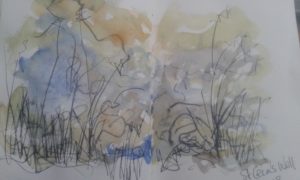 The Glamorgan ridge is cut by deep, steep sided valleys and the first one to the west is Mynydd Llangeinwyr.  It was originally called Allt yr Esgair (the Wooded Slope of the Ridge) but in the 5th Century, St Cein Wyr (St Keyne the Virgin) stopped for a look around, liked what she saw and stayed.  By the time she died on the 8th October 505, she had caused a spring to bubble to the surface near the church which bears her name.  It was bone chillingly cold on the day I sat near the spot, painted some canvas with watercolours 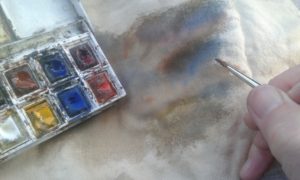 and pinned the fabric to a nearby fence to blow dry in the gale force wind.  I kind of felt a lot of respect for old Cein Wyr.  I was wrapped up in lots of layers and had a flask of coffee to hand.  For her, living atop this ridge as a woman alone, with only the food she could forage, it must have been a bleak and sometimes fearful existence. 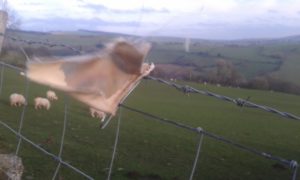 Whilst the material was drying I wandered about picking up a couple of bits of gravel and some sheep’s wool to trap into the embroidery.  As you can see above, I also did a quick field sketch of the area so that I would have a point of reference as the stitchery grew.  It’s taken me a few weeks to reach the point where I’m happy to say it’s finished.  In a world of sat navs and GPS signals, it may not be a map which will get you to a specific place but I think it’s a pretty reasonable record of a journey – though not necessarily mine. 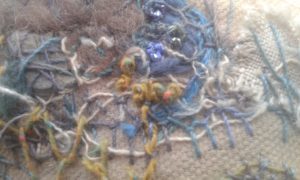 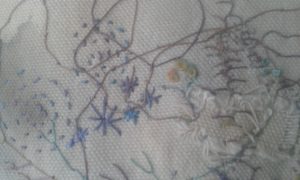 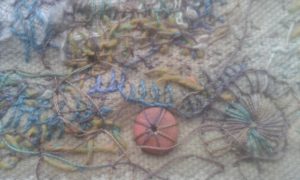 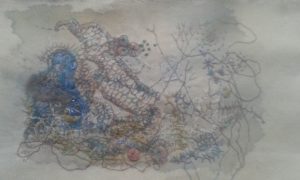