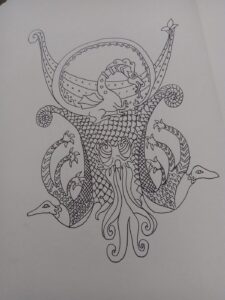 I’ve come to the conclusion that I’ve got Viking ancestry.  I’ve long suspected as much by the way I search the television schedules for programmes which Neil Oliver is presenting, particularly if he’s wandering around the bleak landscape of Scandinavia (though to be honest, anywhere north of Birmingham will do).  And my tendency to visit Viking re-enactments whenever I see them advertised is also a bit of a giveaway – I like the crafts, I like the clothes, I like the opportunity to throw an axe without worrying what the neighbours will think.  Recently I even considered whether I should do one of those DNA tests which breaks down your genetic origins geographically although, to be honest, I pretty much know that on one side I’m Slavic and on the other Welsh, with some French and some English bits.  The only hope for Viking origin comes from Grandad Charles Iden’s ancestors but given that an Osbert de Iden landed in Sussex during the Norman Conquest and had a village named after him (proving that he was either a close mate of William or a land-grabbing bully), it’s a very thin and wispy hope.

Luckily though, two things have come to my attention.  Firstly, in his programme The Vikings – which I recently watched for the umpteenth time – Neil makes the point that the eponymous Northerners weren’t afraid to venture out into the world and there’s even evidence that they got down into the southern reaches of Europe.  Secondly, I found this photograph of my great grandmother Felicité Marie just before she left France for Wales in the early years of the 20th Century.  French, my eye!  Have you ever seen a more Viking looking woman?  A glare that could freeze the marrow in your bones.  And I bet there’s an axe hidden in that hat. 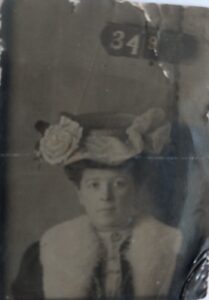 Buoyed with this new found certainty about my ancestors, I decided I should put my Viking-ness to good use.  The Stay At Home and Stay Local messages prevented me from rampaging or pillaging but when Nalbinding appeared on the Heritage Crafts Association (https://heritagecrafts.org.uk) list of endangered craft skills, learning how to do it seemed like a perfect way to channel my inner Noggin the Nog.   Only two things stood in the way of my Viking credentials – a name and a saga.

The Saga of Maria Big Thumb, Multiple Loops and the Oslo Cast On

In the valleys of the West, where the high moorlands meet the grey, cloud-swept skies, in the cool summer evenings that seem longer this year than most, a solitary woman works at her wool crafts and thinks of tales to tell. 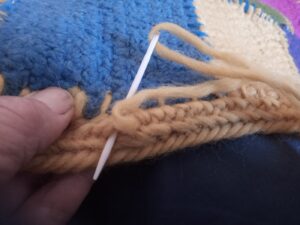 A shadow had fallen across the land and from the Senedd, the order was given to lock the gates and close the bridges.  An edict was issued that people should keep to their hovels and only venture out to search for toilet paper, baking powder or pizza bases.   Tucked away safely in her little cottage, Maria Big Thumb unwrapped the parcel of wool which had just arrived from her allies in the north and knew the time was right to learn the almost lost Viking craft of nalbinding.

After much searching in the forgotten temples of Google, she found an old pdf with drawings of small, dainty hands and caused it to be printed out.  Maria Big Thumb spent many hours trying to understand it and even read the words out loud to see if that helped:

“Wrap the yarn around your fingers 3 times” – yes, simple. “Grab the eight between your fingers” – what eight?  Where did the other five come from?  “There are now 3 thumb loops” – where did the five go?  And how did the thumb join in? 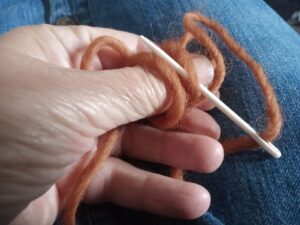 Hint (said the pdf): Say to yourself, 2 loops stay around the thumb, 2 loops get picked up on the needle.

Later that evening, when Maria Big Thumb had calmed down, washed her glass and put the empty bottles out for the recycling, she decided to call upon the god Amazon for help.  Soon a book, illustrated with fine coloured pictures of beautifully manicured fingers arrived.  Maria Big Thumb threaded up her needle and resolved to start again.  On page 27 she found instructions for nalbinding beginners to follow.  “Take the yarn and hold it in the left hand” – yes, simple (but she remembered thinking that last time).  “Fold the big loop to get smaller loops so the result resembles half a looped square” – what big loop?  And what does half a looped square look like? “Pull the needle through the loop and it will become the first loop” – what loop?  WHAT LOOP? 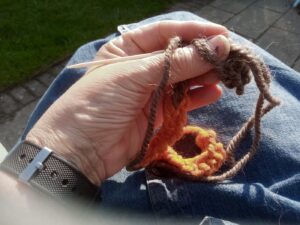 Hint (said the book): If you only have one loop on the thumb, you can take the needle through both mouse ears at the same time.

Risking the wrath of the law, Maria Big Thumb ventured down to the corner shop for the magical potions which would help her understand these strange words but try as she might, and even after the recycling bin was overflowing, they remained dark and mysterious to her.  In the end she realised she had no choice left.  She had worshipped at the temples of Google and she had made offerings to the god Amazon.  Now it was time to go to Valhalla itself; she resolved to consult the great deity YouTube.   “Foolish Maria Big Thumb,” boomed the voice of YouTube, “you have failed because Google sought to teach you in the ways of the Left Handed Start and Amazon tried to trick you with the Finnish Stitch. 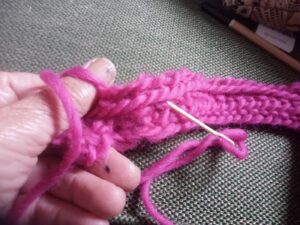 Hint (said YouTube): If you had come to me straight away you would have learnt the Oslo Cast On and all things would have been well.  Better late than never though, so look at this video of a woman with unchipped nail varnish and let’s get on with it.” 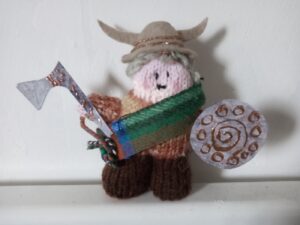 Thus it came to pass that Maria Big Thumb learnt the skill of nalbinding and achieved Level 1 NVQ (Norse Viking Qualification).  She eventually hopes to progress to study for a Level 2 NVQ specialising in yelling loudly and beard plaiting.  Current circumstances mean that Maria Big Thumb is furloughed from her work placement raiding fishing villages on the Scottish coast.  In the meantime she is considering cleaning her nails and washing her hands before featuring them in photographs.

If all goes well, the next blog will appear mid-August.  Until then