One of the first pieces of Creative Embroidery I ever did was an interpretation of a Samuel Johnson quotation –  “words are the daughters of the earth”.  All of the dolls that I make are female in form and reflect upon the historical and cultural influences to which women have always been subject.  I’m particularly interested in folk art traditions of doll-making where both the process of construction and the finished doll are a form of storytelling.   I think of my dolls as small, hand-crafted representations of beings which have human-like features or characteristics.  They fit into one of the following categories: 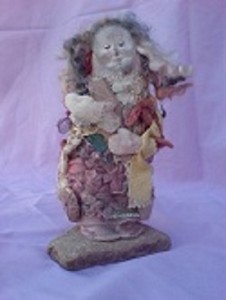 Made using basic stitchery techniques and incorporating natural objects, elemental dolls are both primitive and profound.  There are relatively few surviving examples of early doll-making but it is known that curse dolls, effigies, poppets and totems were made as  spiritual expressions, objects of power and aids to healing. 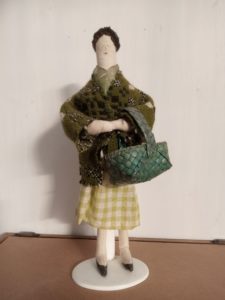 A slightly more complicated construction using jointed limbs and clothing leads to a more recognisable human form and the opportunity for more nuanced storytelling.  Cloth dolls have been used over the centuries as communicators: primitive dolls made by early pioneer women to the USA and Australia were pragmatic illustrations of a harsh social reality while in the UK, dolls made by and in support of suffragettes expressed a demand for cultural and political change.   I make a range of dolls which reflect the role of women as carers in recent history. 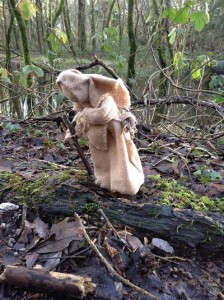 The use of an interior wire allows a doll to be posed and thus a more sculpted appearance to the body posture can be suggested.  Limbs can be positioned to give a suggestion of interrupted articulation or paused movement.  I insert armatures into plain surface fabrics to create storytelling tableaux which usually feature women in different disguises and activities. 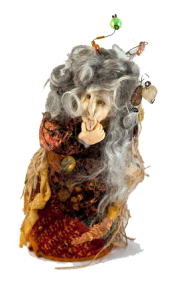 Combining creative embroidery with any or all of the above techniques is the basis of an art doll.  I employ needle-sculpting and painting to achieve facial features which represent not just a physical being but a state of mind.  The stories of art dolls are often not obvious but embellishments will often give clues to the messages and meanings they bear.   The one above illustrates the onset of vertigo!