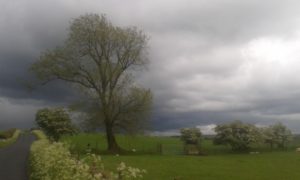 “Breathes there the man with soul so dead, Who never to himself hath said, This is my own, my native land.”  Sir Walter Scott

Before we left Scotland I was determined to see the famous stone circles of Kilmartin.  For some perverse reason our sat nav decided to ignore the obvious route of the A816 and instead took us on a panic attack-inducing, twisting, narrow lane towards the village of Kilmore – aptly named, we thought, especially after we encountered a full size bus hurtling towards us, the driver of which had more faith in his braking ability than our nerves could cope with.  Eventually we got back to the main road and as Kilmartin Glen opened up, we stopped at Carnasserie Castle.

From the bottom of the hill, it looks like one of the ubiquitous stone towers that scatter the Scottish landscape but as you climb the slope, it becomes clear that whoever built this was sending a very serious message about power, ownership and the consequences of threatening either.  The tower is five storeys high and can be climbed.  If listening to the sat nav had been our first mistake of the day then deciding to take the spiral, unlit, un-handrailed, slippery-with-age stone staircase to the top of Carnasserie Castle – while carrying an acrophobic Jack Russell terrier –  was our second.  The views across the vast expanse of the glen were magnificent and certainly gave an indication as to why this landscape attracted the attention of stone circle builders.  Once we’d recovered from the climb, however, there was the terrible realisation that what had come up, had to go down. 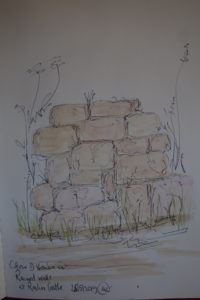 There are few better ways to calm jangling nerves than doing a bit of watercolour painting.  Once on terra firma I tried to capture the colour of the castle stones which from the bottom of the hill look a dour grey but up close are the most delicate pink – quite lovely if you are in a post-traumatic state. 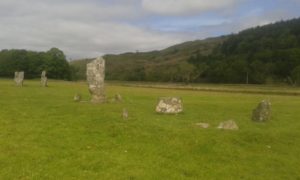 Kilmartin was everything I had hoped to see in terms of landscape archaeology.  There are standing stones, stone circles and burial chambers everywhere.  Probably the biggest disappointment was that we arrived shortly after a coach load of American tourists, many of whom were of the opinion that the best way to appreciate the work of neolithic man was to lie on their backs with their legs stretched up on the sides of the monoliths.  Whilst I don’t have a problem if this is done out of spiritual necessity, it did mean that photo opportunities were limited. 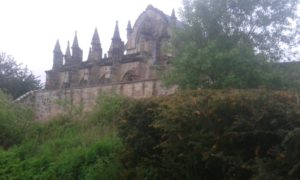 More history lay in wait at our next destination as we briefly visited Rosslyn Chapel, rightly feted because of its stupendous carving but disappointingly famous because of its involvement with the plot and film of The Da Vinci Code.  We made the mistake of being there on a weekend in the school holidays.  If you’ve never been, Roslin (the village) is about 10 miles south of Edinburgh and you should make it your life’s ambition to get there.  Definitely a place for the bucket list but don’t stop at just seeing the chapel – there’s a lovely castle and some terrific walks through historical battlefields around the village too.

Next day we drove to Bamburgh where the massive castle overlooks the wide, golden-sanded beach and from there we headed to Gilsland, once the outer limit of the Roman Empire.   It was here that I intended to make my next piece of Unlost Places art.  The idea came in two parts:  the first is captured in the photograph at the very top of the blog.  Nailed to the fence to the left of the tree was a dead crow.  Doing this is an old farming way of warning other crows to stay away from the field.

The second part of the idea came when I saw this stone.  Here in Wales we chain standing stones too.  It is said that doing so stops the stone from wandering off and taking the path with it. 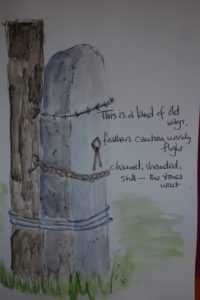 This was the first time that I had done performance art as part of Unlost Places and my recitation of a poetic tercet whilst standing in the middle of a Northumbrian lane probably frightened off more crows that the old farming way.  Being so close to Hadrian’s Wall meant I was spoilt for choice when it came to making a larger piece of artwork.  Until, that is, we passed the Temple of Mithras at Carrawburgh. 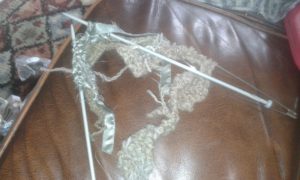 Creative Knitting is always a bit fiddly and you can never be sure it’s going to work out until the very last bead is attached or French Knot stitched.  And to those who think that maps are drawn with lines on paper all I can say is that for me, on a damp Tuesday afternoon in May, standing in the Temple of Mithras in the bleak landscape of Carrawburgh, this is how I understood my native land. 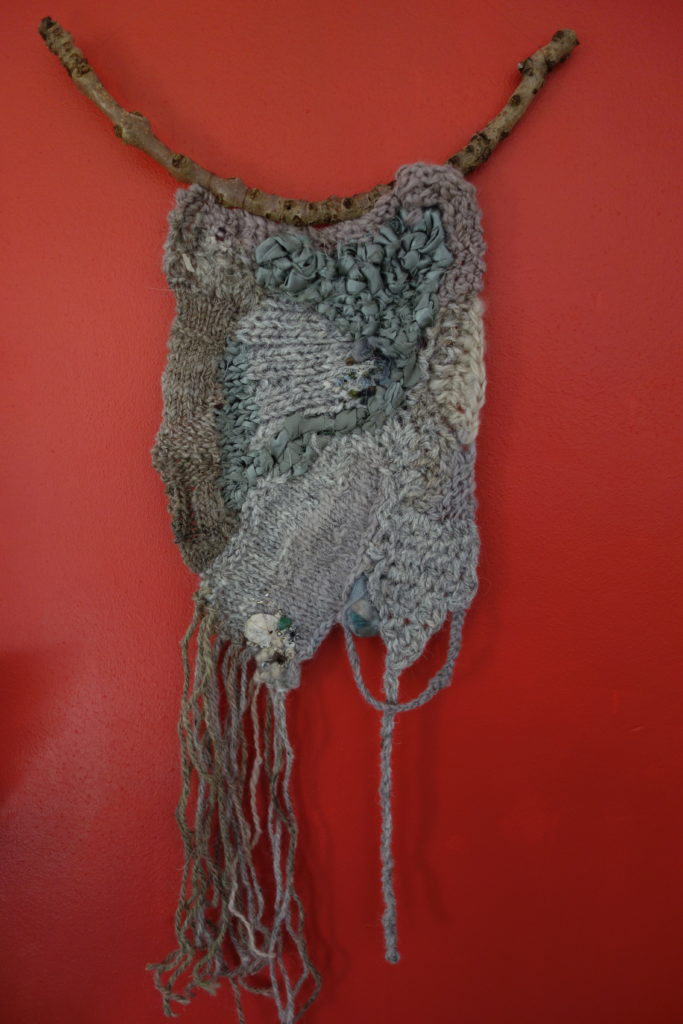