You can’t avoid  heroes and saints if you live in Wales because R.S.Thomas is wrong – they are not dead.  Their names and their legacies live on in place, field, church and street names.    Add a little digging in history books or chatting to people about local traditions and it becomes obvious that Welsh heroes and saints are not lying quietly in their graves waiting for the last trumpet to sound.  On the contrary, from the fringes of our shared cultural memories they are busy inspiring everything from art and literature to education and heritage tourism.

Wales didn’t just have heroes but it had a bardic tradition that helped us remember their lives.  Sometimes we had a bit of help from our enemies too.  Tacitus immortalised Caradog (who almost thwarted the Roman invasion, was captured and taken to Rome but so impressed the citizens there with his dignity and eloquence that he was released and allowed to return to Wales).  Tacitus described the Silures tribe – and, so presumably Caradog himself – as powerful, swarthy and curly haired.  Welsh is a language rich in visual imagery so long before maps were drawn, in Wales they were spoken.  You could navigate your way around the country just using place names.

On the 1871 map of Mynydd y Gaer  (the mountain fort) is an Iron Age hill fort called Caer Caradog (Caradog’s Fort); although the earthwork is still shown, it is nameless on modern maps.   It led to me composing a poetic tercet and an interpretation in mixed media art for my MA dissertation last year. 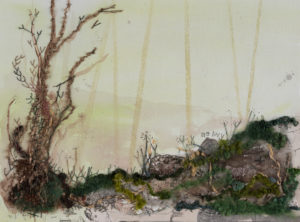 “The bitter storm has no tears; moss damp stones edge my aelwyd; mine was a rain sweetened life.”

The burial mound called Twyn Caradog is close by and its location implies that someone called Caradog met their end there or that Caradog caused the mound to be raised. 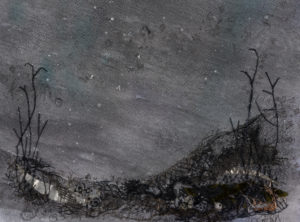 “Only to you my eyes are blind; beyond the day I see stars draped across eternity.”

When you walk through the landscape of Wales, you tread the same paths as heroes like Caradog and experience what Alfred Watkins described as

“lingering fragments of fact disguised by an overlay of generations of imaginings.”

If you should look to a map to aid your navigation, take an old one and remember that as Valerie Goodwin says,

“a map is an abstract idea of a place; it is a drawing, an interpretation of reality based on what the map maker wants to show.  Mapmakers make choices about what to include as well as what to leave out – accordingly, a map is a reflection of its maker.”

Some years ago, I read somewhere (I know, I should have made a note of the reference but I didn’t) that St Ciwg was the son of the 6th century saint, Canna.  Now whether that means son in a familial sense or son as in Ciwg was a follower of Canna is a matter of debate in academic circles and doesn’t detract from why I’m interested in Ciwg.  Firstly, I wonder why a woman would carry a child for nine long months and then say “I know, I’ll call him Ciwg” but secondly I live about a mile away from a standing stone, again named on Victorian maps but not modern ones, Carn Ciwg .

Close by are places called Blaen Ciw, Cwm Ciw, Nant Ciw and Heol y Cyw.    One of the first things you learn in Welsh is that it’s ok to drop the last letter off a lot of words so in my mind, it’s quite logical to imagine that all the Ciw’s were once Ciwg‘s.  The next thing that you find out is that in Welsh there is something called “the wandering y of Glamorgan” which means that a y has a lot of variants when it comes to pronunciation. In this case the cyw in Heol y Cyw sounds exactly the same as ciw so I have come to the conclusion (which I have to admit hardly anyone else I know agrees with but I see that as their problem not mine) that my old mate St Ciwg had a standing stone, a ridge, a valley, a stream and a road all named after him in the 6th Century.

About five miles north of Carn Ciwg is the beautiful and isolated church of St Cein.  She was one of the many daughters of Brychan of Brycheiniog.  After a lot of wandering about the country in the 6th Century too, curing ills, driving snakes out a town in Somerset (later called Keynsham in her honour) she finally settled in my part of Wales where a holy spring gushed forth as soon as she unpacked her bags.  Whilst the village of Llangeinor (Cein’s stone enclosure) is in the valley, St Cein’s church itself is perched on the hill above, close to on one of the ancient drovers’ routes used to move cattle and sheep from the farmland communities to the market towns in England.  Oliver Cromwell paid a visit (he went everywhere) and was so annoyed at being kept waiting by the the abbot in charge that he struck the font in temper, leaving a bit of a gouge in the stone work.

The building has been much altered over the years and is now mostly Victorian with a bit of medieval lurking here and there.  It’s where I quite often park in my tiny camper van to write (an update on the book comes later) or do some stitching.  I get easily distracted by the views however.  One of the most interesting points about the place though is that it’s on a direct line of site with the church of St Dyfodwg in the village of Glynogwr and traditionally the incumbents would use the church towers and bells to warn each other of danger approaching.  By now you should have guessed that St Dyfodwg was also roaming the area in the 6th Century and he, along with St Gwynno and St Illtyd is still remembered in the church and settlement called Llantrisant (the church or stone enclosure of three saints).

The Ogwr Ridgeway  is a 13 mile footpath which follows an ancient route from the site of Margam Abbey (yes, 6th Century) to Llantrisant with stops at St Cein’s and St Dyfodwg’s.  St Gwynno, meanwhile, is still remembered every New Year’s Eve when the iconic Nos Galan races recreate Guto Nyth Bran’s willingness to run from his mother’s house in Mountain Ash to Llanwonno Church and back before the kettle boiled on her fire.  St Illtyd went on to found a monastic school at Llantwit Major in the Vale of Glamorgan.  His church in the town still has beautiful medieval murals as well as 1500 year old carved stones and Celtic crosses and is now a recognised pilgrimage destination.

You’ll probably have guessed by now what the subjects of my next creative project will be.  They will have to wait however until I finish writing the current book, which – fingers & toes crossed – should be in September.  I’m delighted to say that nine very talented people have agreed to be involved as case studies including Nick (a-work-in-progress.co.uk), Phil, Helen   and Kathleen .

The problem is now that no matter how much I want to be walking the hills with heroes and saints, I know I’ve got to be sitting at the computer writing about creative practice or I’ll be writing nine emails to apologise for wasting people’s time.